It's not enough to just be uncanny

Over the course of this year I’ve worked on a wearable project that utilizes a Silicon Labs Blue Gecko BGM113. I’ve also spent a bunch of time playing with my Thunderboard React and Thunderboard Sense 2. 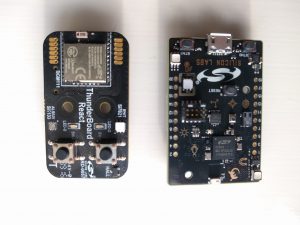 Along the way, I think I’ve picked up a few things. As an old bloke who’s been in this embedded software caper for more than a quarter of a century, I figure I might have something worthwhile to share. Also, I absolutely love this stuff. Hence I’m launching into a series of posts.

I’ll probably cover a collection of Thunderboard-specific topics. Such as:

I’ll probably lurch into a few other more general areas in which I’ll just use the Thunderboard as an example. Like:

You can play along at home, or you can grab the code, as it evolves, from here:

Right then. Let’s start with Thunderboard React – Over The Air (OTA) Upgrades.